Recently I got a new MacBook Pro(late 2013 model) 13.3 Retina display and everything was working like charm while I was using wifi to connect to internet and that pretty much should be because you expect everything perfect after spending that much amount on a machine. After moving to my university where wifi connectivity is not present at every place I switched to Thunderbolt to Gigabit Ethernet to connect to internet and this was the moment when things seemed to be changing and I started getting troubles connecting to internet.

At the first time when I connected to internet it took about 15 min for internet to get stabilized and was continuously connecting and dissconnecting as if someone was continuously playing with the Ethernet cable, I ignored it and continued with my work assuming some problem with the VLAN used in university hostel and after some time the internet got dissconnected again automatically while working and came back after around 2 min.

I tried to ping google from terminal and observed quite significant packet loss like this one:

This was the first problem - Packet loss for ping requests.

It could still be tolerated but the most annoying part was I was not able to connect to internet after a reboot or sleep and had to wait for around 15-30 min everytime for the connection to get stabilized. I checked the netork preferences at the this time by going to

System Preference > Network and observed that machine could not even fetch the Ip address from DHCP server and the Thuderbot to ethernet connection was continuously flickering Green and Red light.

I googled about the problem to find if its just my machine or other users are facing this problem and found some very useful sources of discussion:

Which clearly indicate this issue with ARP caching by OS X Mavericks and problem with only some of the machines and not all. So I was curious to check my arp output at this point of time and here is what it looked like:

This is at the moment when problem is lot worse.

As mentioned it disables Unicast ARP cache validation. But… unfortunately this also did not work for me :-(

The solution which is quite promising and worked for me is to: 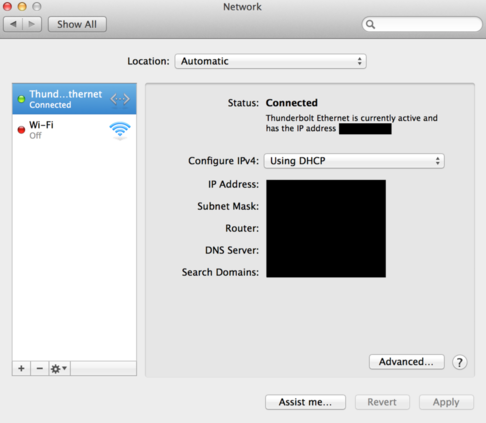 This solution works fine for me and I am able to connect to internet using Thunderbolt to Gigabit Ethernet but at times I still see some packet loss which is almost insignificant.

So there is no permanent solution as of now but I hope Apple to investigate more on this and fix this in their next release. Some people are really pushing them to fix the problem and I think most of updates about this issue can be found on [MacStadium Blog][macstadium-blog] who are using Mac Mini’s in their data centeres, having the same problem with many of their machines and are in regular contact with the Apple Developers.

I thought this piece of interrogation and ispection worth sharing with everyone so that you don’t waste time trying random hacks described on various internet websites if you have the same issue.